We worked with Comedy Fitness to develop a hub for their fitness podcasts and information about their training services. By working with Trajectory, Comedy Fitness now: 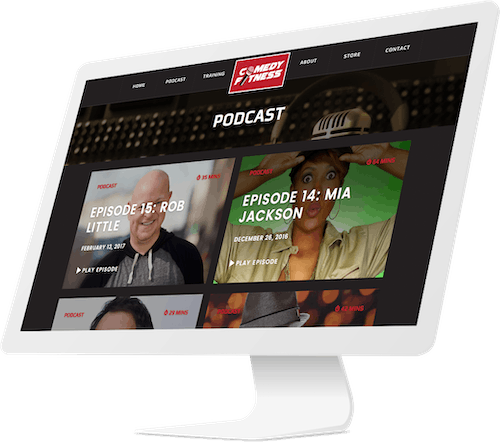 Offers a centralized place for users to find their podcasts.

We designed a responsive, engaging website with SEO-friendly content and code to draw users to the Comedy Fitness podcast.

We integrated the Comedy Fitness social media accounts with their new website to establish and nurture a strong social media following.

Provides 3 methods for users to tune in to their podcasts.

We mixed and mastered the Comedy Fitness podcasts for streaming across platforms like iTunes and SoundCloud as well as their website. 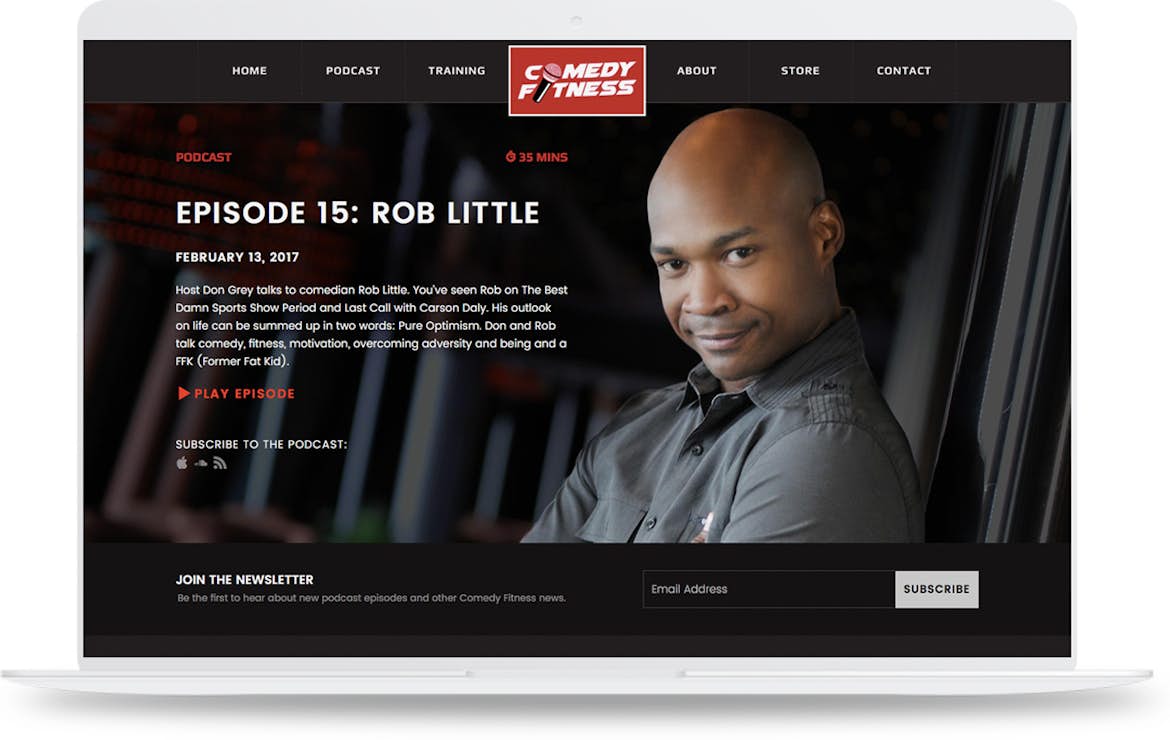 Comedy Fitness is run by Don Grey, an Atlanta-based personal trainer, comedian, and life coach. He studied exercise science and video production in school and, after graduating, he worked as a personal trainer for celebrities such as Chuck Woolery, Kirk Franklin, and Macy Gray. During this time, he began doing open mic performances in Hollywood and joined the Screen Actors Guild, landing acting roles on Sabrina the Teenage Witch and Spy TV.

When he moved to Atlanta, Don worked on shows and continued studying fitness. He won the Silver Nails Award for comedy, created a “Tae Stick” (kickboxing and Escrima stick fighting) fitness class, and was invited to speak on Oprah, The View, and Good Morning America.

Don’s podcast, Comedy Fitness, offers free, real-world advice for listeners to get fit. Don recruits celebrities and comedians to talk about healthy lifestyles and workouts, and special podcasts feature workout routines the listener can complete in real time. The goal of Comedy Fitness is to show listeners how healthy living can be fun and attainable.

Prior to working with Trajectory, Comedy Fitness faced three main challenges in their web design needs: 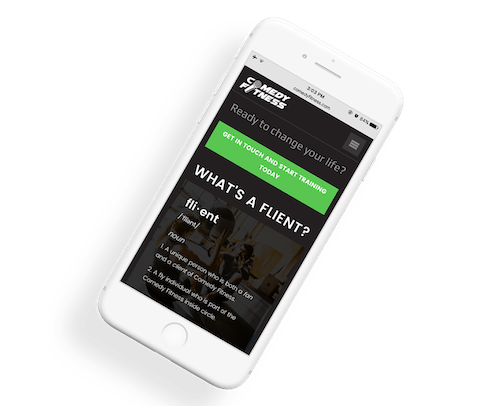 Lack of awareness for their podcasts.

Without a website to rank in search results or direct users to, Comedy Fitness mostly relied on word-of-mouth to promote their podcast series. With Don’s solid reputation, this was enough to garner some attention, but he knew a website could give them unmatched growth opportunities.

Lack of engagement with their social media accounts.

A professional website was the missing piece to tie all of Comedy Fitness’ online channels together. His social media engagement was limited to organic growth through Don’s personal accounts and he wanted to provide a clear place for users to connect with Comedy Fitness.

Lack of options for their listeners to tune in.

Don wanted to provide various methods for users to listen to the podcast and didn’t want to limit users to downloadable MP3 files. He knew his target audience was active on iTunes and SoundCloud but didn’t have the means to master his audio files for those formats.

Comedy Fitness had the potential to be a genuinely engaging, humorous, and helpful resource for people interested in living a healthier lifestyle, but Don was missing out on key opportunities for finding and connecting with those users.

We were committed to helping Comedy Fitness overcome these challenges, and we followed a strategic approach to make this happen:

In addition to designing an aesthetically pleasing website, we included a full content strategy and hand-written, clean code throughout. By following web design best practices in all areas, we created a website with strong search rankings to attract new listeners to the podcast. 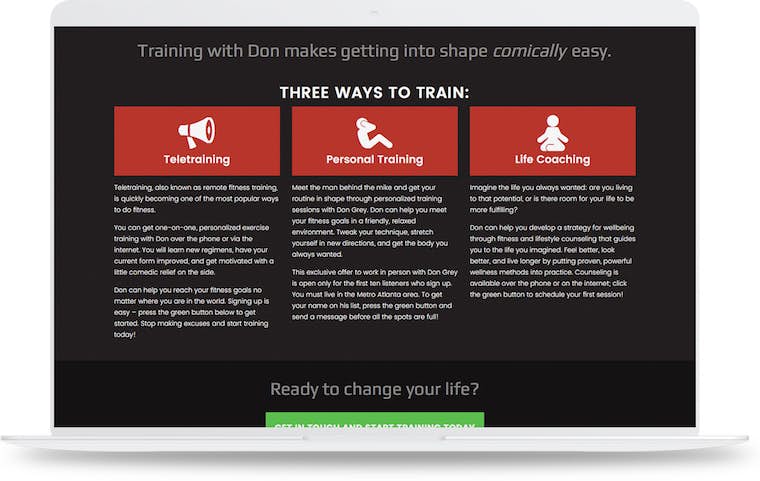 We integrated their social media accounts with their website.

We added links to the Comedy Fitness social media accounts to the website, making it easy for users to connect with Don Grey while listening to the podcasts and for him to generate interest in upcoming podcast episodes. 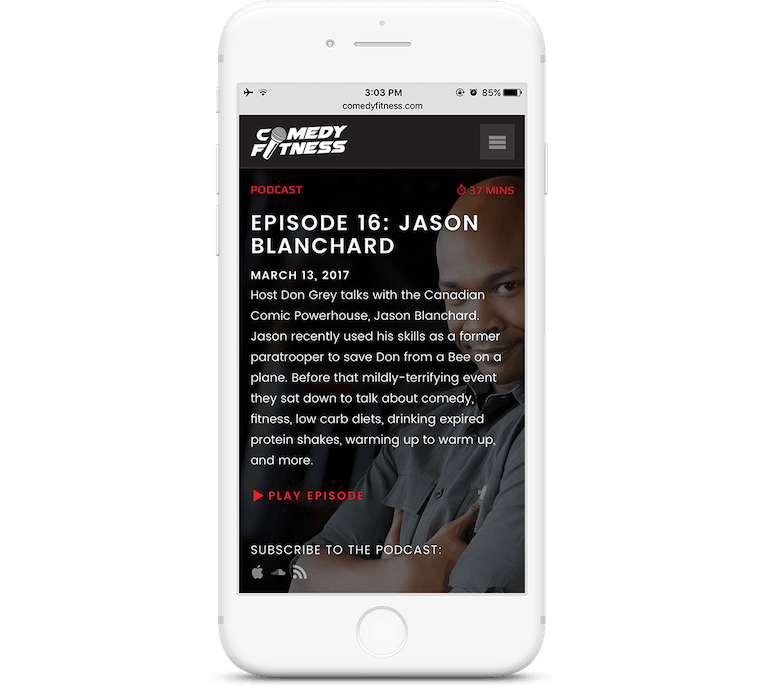 We mixed and mastered their podcasts to suit a variety of formats.

We took the podcast audio files and mixed and mastered them into formats suited for their website, iTunes, and SoundCloud. We included links to the iTunes and SoundCloud pages with the social media links, giving users all the tools they need to listen in their preferred format. 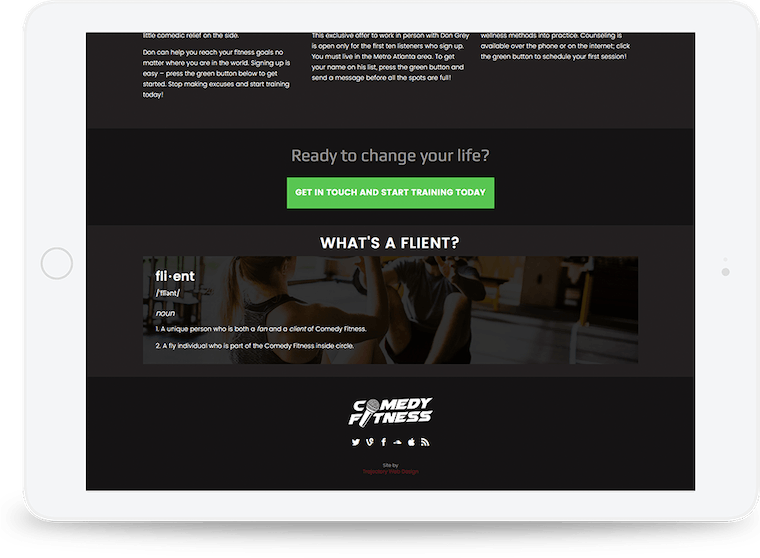 When Comedy Fitness’ new website launched, Don had a central hub where he could upload his podcasts, inform users about his services, and connect with a wider target audience. We addressed each of his three key challenges, and Comedy Fitness has experienced the following results:

A steady stream of new visitors to their website.

The new website acts as a centralized location for all things related to Comedy Fitness. In addition to Don sharing the website with listeners, the website regularly gains new visitors through organic search results and the Comedy Fitness podcast following has increased.

A social media following of more than 7,000 users.

The combined effort of Don’s reputation and the social media integration with the website has led to a Comedy Fitness following of more than 2,000 Twitter followers and more than 5,000 Vine followers, allowing Don to connect with his listeners in several places online.

Engagement across a variety of podcast formats.

The free Comedy Fitness podcasts are available for immediate streaming through the website as well as through iTunes and SoundCloud, providing users a variety of convenient methods for tuning in and even downloading the podcast episodes.

Don Grey had a strong vision of what he wanted, and it was clear early in our conversations with him that this podcast was his passion. We took Don’s vision and executed it through design, development, and content, leading to a website that’s easy to find and easy to engage with.

END_OF_DOCUMENT_TOKEN_TO_BE_REPLACED 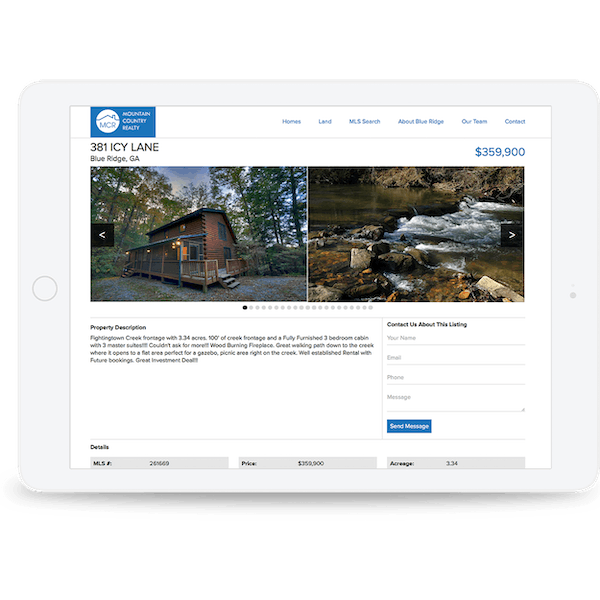 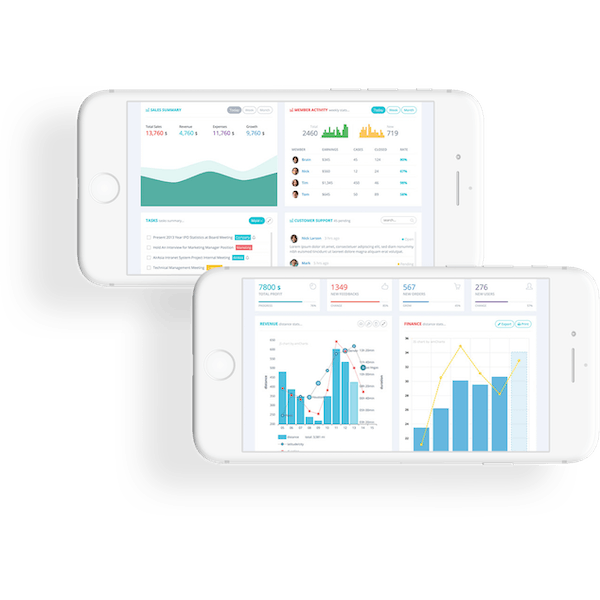 Ready for a slick new website, increased traffic and more converting customers? Tell us a little about your business and we’ll reach out to get your project underway. 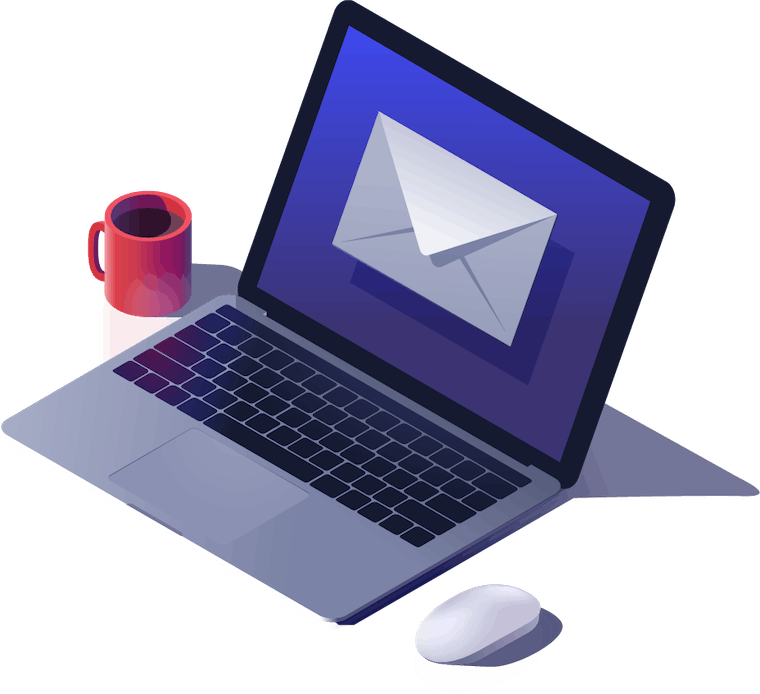